Tourmalines: a big and colorful family 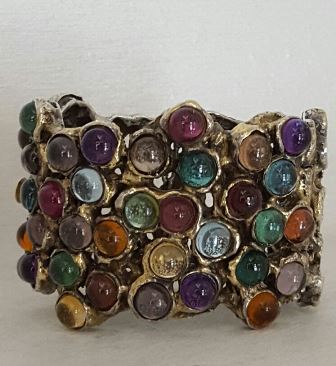 The bibliography on tourmalines is comparable to their color range: wide and extensive. Equally various are their appellatives: Rainbow Stone, Stone of the Muses, Stone of Command, Stone of protection, Stone of Purification, Stone of Seduction.

In order to not disappoint anyone, I like them all and in the next article they will inspire us for the narration of our April gem’s wonderful world.
For now I just wish to share some interesting facts about its features and origin.

Name: The name ‘tourmaline’ comes from the Sinhalese word ‘tura mali’, used by the jewel merchants of Ceylon Island (Sri Lanka), which translates more or less as ‘the stone of mixed colors’.

Composition: The main feature of this gemstone is that it exists in all the colors of the rainbow. The basic composition of the great tourmalines family (class of silicates, subclass of cyclosilicates) is boron silicate of aluminum, magnesium and sodium, plus other minerals that contributes to its countless shades.

Species and varieties: We have specific names for its main color tones, often related to the color or to the region of gems’ first historical discovery.

Elbaite: Named after the Elba Island in Italy. This type contains lithium. It can be multi-color or pale pink.

Schörl or Schorlite: The deep black color of these tourmalines is given by the high percentage of iron.

Dravite: Named after the river Drava, a tributary of the Danube. It is also known as ‘brown tourmaline’ because it is mainly brown with yellow-grey and yellow-green variations. It contains a very high percentage of magnesium and boron.

Rubellite: Also known as ‘Siberian ruby’, it is intensely red, pinkish-red or violet. The main feature is that its color intensity does not change, either under natural or artificial light.

Verdelite: Known as ‘Brazilian emerald’, it shows a very intense green color given by chrome.

Indicolite: Known as ‘Brazilian sapphire’. It is blue and indigo blue, depending on the mix between iron and magnesium.

Watermelon: It is a curious two-color tourmaline variant, red in the center and green in the external area.

Mohrenkopf: It is another type of bicolor tourmaline, which, as the name says, recalls the appearance of the famous German sweet. The center of the gem is almost colorless while the external edges are black.

DICHROISM: It is a typical feature of tourmalines for which the color has a different intensity when observed along the optical axis or in a direction perpendicular to that axis. A jeweler must carefully evaluate this feature when cutting the gem.

PYROELECTRICITY AND PIEZOELECTRICITY: Both indicate the property of the gemstone to produce small electrical phenomena when subjected to heat or pressure. In the second case the gem produces a slight oscillation like the rock crystal, allowing it to attract thin bodies (e.g. ashes). For this latter feature in the past it has earned the nickname of ‘ashes catcher’ (in Dutch ‘Aschentrekker’).

All over the world there are many deposits of tourmaline, in Italy too, but the most important are located in Afghanistan, Brazil, Kenya, Madagascar, Mozambique, Nigeria, Pakistan, USA (California and Maine), Sri Lanka, Tanzania, Zimbabwe.

Made in Italy Stone of April Tourmalines