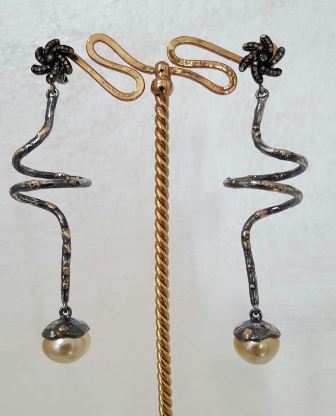 Between history and oddities, we go on with our story on the gem of February: the pearl.

A bit of history

As proven by numerous finds and documents, it is officially the oldest jewel in the world. The first evidence could only come from Asian and Middle Eastern coasts, rich of pearl oysters. They were intended as royal offerings and as objects for religious ceremonies.
The value and beauty of this gift of nature is also proved in the Koran and in biblical texts, where the heavenly kingdom is often compared to a pearl, symbol of perfection and purity. Its spread into the West, always among privileged classes, must be ascribed to Alexander the Great and to Julius Caesar. The latter even came to request a law that would limit the use of pearl jewelry only to the rulers of the Roman Empire during the first century B.C. They were a real status symbol of the time and even the queen Cleopatra could not escape their charm.

This trend actually remained unchanged even in the Middle Ages and up to modern times.

After the conquest of the Americas, a flourishing trade started from center and south of the new continent. However, the demand increased to such a level that, at the beginning of 1800, the supply of oysters was drastically reduced. The first pearls farms were introduced to solve this problem.

Actually in China they were already active even if rather modest and not widespread. The turning point came in 1893, when the Japanese Kokichi Mikimoto pulled out the first pearl. His technique involved the use of an irritant, which stimulated the oyster to form a pearl.

Natural pearls are still very rare and expensive, but those cultivated nowadays in the same seas have nothing to envy in terms of beauty and luster to the natural ones.

It is said that Cleopatra, to win a bet with Mark Antony, melted and then drank a pearl proving to be so powerful to be able to consume the wealth of an entire nation in one meal.

More recent is the anecdote of the renowned French jeweler Jacques Cartier who, in 1916, acquired his first American store in the legendary New York’s Fifth Avenue by trading two pearl strands equal to the value of the property.

Finally, I suggest you to have a look at the impressive photo book ‘The Island of the Fisherwomen’ by Fosco Maraini about the Ama of Hekura. They are women who, even today (although very few and protected by UNESCO), dedicate themselves to the hunting and fertilization of oysters according to a very ancient philosophy and ritual.

For the moment we end up here. In the next article we will discover other unusual and magical aspects of pearls.

See you soon, Yours Fiorenza.