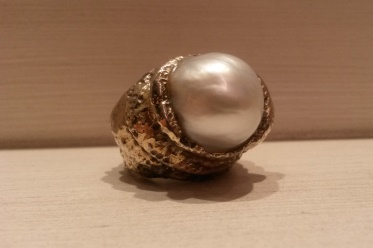 The bibliography on pearls is extraordinarily wide and fascinating, so I will report only some of the hints I love to share with my clients.

Object of desire and ubiquitous element both in royal and esoteric sets, the pearl is considered a divine gift to humanity.
Actually it is a gift that has no counterpart in the prodigality of nature, since it comes from the defensive reaction of an aquatic creature.
I do not mean to ruin the magic of mythological stories with too many scientific details, but pearls are formed inside the shell as a defense mechanism against a potentially threatening irritant agent. The mollusk creates a pearl sac to seal off the irritation depositing layers of calcium carbonate in the form of the mineral aragonite or a mixture of aragonite and calcite held together by an organic horn-like compound called conchiolin which makes up an organic gem.

Shape: Round, oval, drop, baroque (regular or asymmetric).
Size: From the 2 mm of Akoya to the 20 mm of Tahitian and Australian pearls.
Body color: Apricot, orange, white, blue, bronze, champagne, chocolate, cream, yellow, gray, black, gold, peach, plum, green, purple, red violet.
Lustre: Also called ‘orient’, an optical phenomenon produced by the reflection, refraction, and diffraction of light from the translucent layers of nacre (i.e. aragonite and calcite crystals).
Overtone: Secondary color on the surface of a natural or cultured pearl. It is created by nacre layers interfering with white light and splitting it into its component colors.
Measure: Grain. Unit of weight associated with natural pearls. One grain equals 0.25 carat.

South Seas pearls: Important and prolific farms are located in the coastal regions of Australia (Broome pearls), Indonesia, the Philippines. South Seas pearls are large, thick, shiny and smooth like satin, in golden silver and white colors.
Akoya pearls: These varieties are found in Japan, cultivated since 1893 starting from an idea by Kokichi Mikimoto. Smaller than the Australian and the Chinese pearls, Akoya are perfectly round, with colors ranging from white to cream, pink and silver pink. The most valuable are the Hanadama pearls.
Tahitian pearls: In French Polynesia, Gambia islands, we find the most spectacular natural and cultured pearls. The most valuable are the black ones, although their real colors fade from silver gray to black with blue, green and purple overtones.
Freshwater pearls: Cultivated mainly in China thanks to a tradition began in the Thirteenth century. They have endless shapes and colors, with a very solid structure made entirely of nacre, without a nucleus.
Keshi pearls (Japanese for ‘poppy seeds’): Both from fresh and salt water cultures, they  are formed when a bead nucleus is rejected by the mollusk.
Cortez pearls: Originally from California, they have become almost extinct in their natural version, such as Mabe Pearls, therefore they are cultivated. They are extremely beautiful and with unusual colors.
Conch pearls: They only exist in their natural variant, produced in the Caribbean Seas. Unique and valuable, they show a particular flamage, so that their surface seems to be in flames. They are not made of mother of pearl but composed of calcareous concretions. They have a baroque shape, small dimensions, white or pink hues.

How to distinguish natural and cultured pearls from imitation ones?
Rub the pearls against your front teeth. A real pearl will usually have a slightly rough or gritty texture from tiny scale-like imperfections in its outer layers of nacre. Fake pearls made from glass or plastic will usually be almost perfectly smooth.