Labradorite: the stone of transformation (part I) 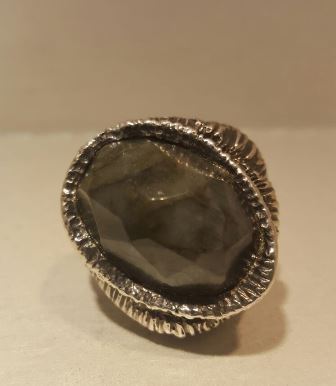 So we are in March, the month of change. The time when earth awakes. The stone that best reflects this concept is labradorite, widely known as the stone of transformation. It is a special gem that does not belong to this world only (it was also extracted on the moon and on some meteorites), but also to that of spirituality.

Structure: It is a triclinic-calcium-sodium feldspar, consisting primarily of a mixture of albite (do you remember the clair de lune?) and anorthite silicates.

It has a Mohs hardness of about 6, therefore, like all feldspars, it is sensitive to impact and pressure.

The main feature, which also determines its commercial value, is the Schiller effect (or ‘adularescence’) reminiscent of peacock tail shades, a phenomenon due to the effect of light refraction on the gem’s lamellar structure.

Color: White, gray, black-gray, white-gray, yellow, brown, pale green.
The mineral shows an opaque base on a silver-gray background with many black inclusions made of thin threads of magnetite, hematite and copper. On this base all the colors of the spectrum are visible with a dominance of blue and green. There are also varieties in white, whitish gray, yellow gold and matte red.

Cut: Labradorite is rarely used in mass jewelry (that is to say by very commercial brands), while it is loved by designers and goldsmiths, who look at it as the perfect gem to create unique and non-replicable objects. The ideal cut to bring out the iridescence is the cabochon, using the foresight to keep the base parallel to the lamellae, so as to maintain the flash of adularescence perfectly centered, directing the color towards the top of the gem.

It mainly comes from the Canadian coast of Labrador (from which its name comes), Ukraine, Finland (where the most expensive type is extracted, known as spectrolite, which displays a range of colors reminiscent of northern lights), Sweden and Madagascar (where a transparent variety with blue reflections was found called ‘black moon stone’).