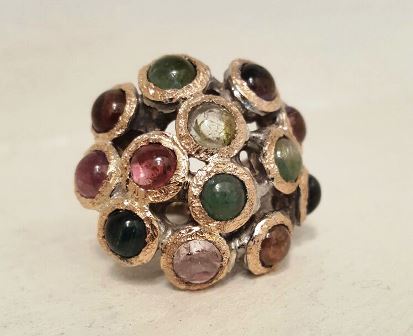 The beauty of tourmaline was already well known in ancient times both in Greek and Egyptian cultures.

The legend tells that our gem, jealously preserved inside the womb of an island in front of Mozambique (the modern Madagascar), was brought to light as a result of a violent flood. Emerging from obscurity, it captured all the colors of the rainbow that was generated after the storm.

Equally legendary are the jewels made with tourmaline, many of them are part of the crown treasures of royal European families, like the Swedish and the Tsars. Noteworthy is also the magnificent obsession of Empress Mother Cixi (Tz’uHsi) for the rose type, so that towards the beginning of 1900 Tiffany & Co. sent several extraordinary gems from California’s Mesa mines to China. After her death, the Empress body was placed on a tourmaline pillow.

In the technical study of our stone, I was surprised to discover that it is appreciated also in other fields, like medicine and cosmetics. In the first case, it is used as a component for medical devices meant for osteoarticular and muscular therapies. In cosmetics, famous brands (including my beloved Aveda) use it in some moisturizers, claiming that it limits the penetration of contaminants.

A friend of mine, expert of Bio Living, suggests the use of tourmaline to deflect the harmful magnetic fields, such as those of the most common household appliances, computers and smart phones, thanks to its piezoelectric and pyroelectric capacities.

Alongside these tips, we find also the unusual prescriptions of Crystal healing, as many as the colors of the gem, among these:
Pink tourmaline makes a person more attractive, prepares to live love with spontaneity and no fears.
Blue tourmaline stimulates creativity and protects the mind from negative thoughts.
Green tourmaline increases the joie de vivre, balances the nervous system helping it to resist stress.
Black tourmaline is the stone of protection par excellence, no negative force will reach you.

It is now clear why our gem was compared to the philosopher’s stone. It does not exactly turn everything into gold, but it certainly enhances the value of the person keeping it. A true elixir for every occasion!

I do not know about you, but I feel the urgent need to wear a ring with at least three or four tourmalines!