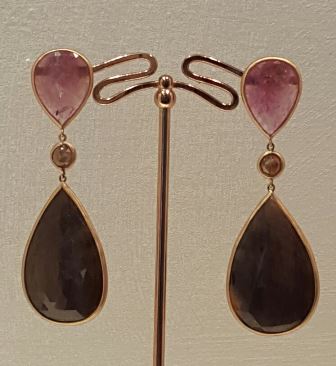 Sapphires are precious stones, deeply connected to the history of men

Legend says that the tablets on which were written the Ten Commandments were made of sapphires! Only a divine hand could engrave them. Only an uncommon strength could break them! The link to the divine is constantly present in the Christian-Jewish culture.
The famous King Solomon used to wear a huge sapphire, which represented the wisdom infused by God himself. Someone even ventures to say that the hexagram of the Star of David was inspired by the star sapphire.

In the Middle Ages sapphires were only for privileged people, including high ecclesiastical orders. The image of the Madonna mantle was associated to that of the sky. The theological virtues were identified with these gems. Actually, next to this mystical image, there is also a more secular tradition which assigns to sapphires stunning enchanting powers.

Apollodorus tells that the beautiful Helen, wife of Menelaus, used to wear a big sapphire. It was believed that the gem was the secret of her desirability and the reason why Paris, completely overcome by it, decided to kidnap her causing the Trojan War.
Even the ring of Solomon apparently served to fascinate the Queen of Sheba.

Scrolling through history, we find a nice reference to our stones in Charlemagne who possessed a sacred amulet inside which a relic of the Holy Cross was placed between two sapphires.

Offering jewelry with sapphires was also a way to assign important roles in power hierarchy. In a well-known book by G.F. Kunz ‘Rings for the Finger (Dover Jewelry and Metalwork)’ is quoted the symbolic act of Pope Innocent III, who gave to King Richard I of England (Lionheart) four rings, including one with a sapphire representing hope in faith.

Many other characters, such as Ivan the Terrible, Rudolf II, Catherine of Russia, imposed the use of sapphires in their royal jewelry sets as a symbol both of secular and spiritual power.

The ruler of the Mogul Empire, Shahbuddin Mohammed Shah Jahan (who ordered the construction of Taj Mahal) even had a throne studded with sapphires (called the Peacock Throne).

Finally I would mention as addicts(more or less compulsive) to our gem many Hollywood actresses like Mary Pickford, Joan Crawford, Elizabeth Taylor, Jean Harlow.

Blue, purple, yellow, cognac, orange, green, pink, white: We have so many wonderful colors to fulfill with the beauty of sapphires every mood, passion, inspiration. Come to my shop and I will help you in choosing the one that will capture your heart.