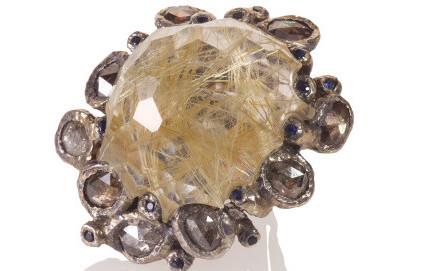 As we saw earlier, the rutile quartz has specific and detectable attributes. It evokes territories that may be linked to our memories or our dreams.

Let’s continue to discover it in its most magical and appealing properties.

The rutile quartz was known in ancient times as “maidenhair”, that is Hair of Venus, because of its threadlike rutile inclusions resembling hair and it was said to have the power to enlighten men.

Why owning a jewel made of rutile quartz?

• First, because we like it. We like the color, we like as it enriches the jewel.
• Because we do want its metallic sparkle and the play of lights by the threads inside the stone, at times golden as a hot summer or red as the autumn.
• Finally, because wearing a rutile quartz jewel we could get a series of psychological and physical benefits associated with this mineral, which in ancient times was considered as ice that could not be melted. It can play on mind, keeping it lucid and clear to pursue ideas and projects. According to the New Age notion, it has a good influence not only on mental stability but also on the immune system and mood. Perfect for the fall season!

So we choose a rutile quartz jewel, created by Fiore All’Occhiello Gioielli, to celebrate a special memory. We choose it to make an investment in favor of everyday life.

Why not to wear something precious to feel more beautiful and more energetic?

Discover the creations found in Fiore All’Occhiello Gioielli to enhance your beauty with our gem of the month, the rutile quartz.