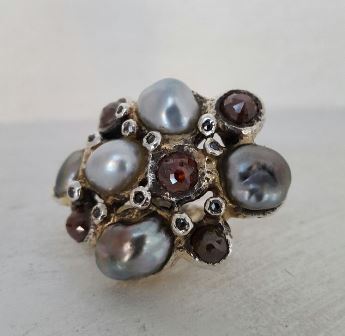 Not only history: A look at legends and properties of the pearl

Stories about the fanciful origins of pearls come from China, India and Polynesian islands. What ties together all these tales is the unearthly genesis of the gem. The best-known myths are related to the heavenly rain, able to fertilize the clams, and to the moonlight, just as powerful as to influence the formation of pearls in its own image.

The belief that pearls were divine tears or the tears of Adam and Eve after their expulsion from the Garden of Eden also spread through time.

Personally, I prefer the painting by Botticelli, The Birth of Aphrodite, where the goddess of love arises like a pearl from an oyster.

No coincidence that in the Greek-Roman culture it has always been associated with pure love and with marriage. The same symbolism was shared by the Hindus, who gifted auspicious pearls in the occasion of weddings.

This special gemstone was also a precious object for medical and magical healing. Its powder was prescribed to treat skin and eyesight, to soothe respiratory disorders and intimate congestion. In today’s pharmacopoeia pearls discarded from jewelry are used to prepare high quality pharmaceutical calcium.

Shamans used to advise to wear pearls to get clarity of mind and fortitude, to deal with emotionally difficult situations. The power to win others respect and loyalty was also attributed to pearls. For this reason maybe, the powerful Elizabeth I, called “Queen of pearls“, used to place an incredible quantity of these gems in her clothing.

In many rituals it is suggested to wear always pearls in pairs, for a greater spiritual balance, while to keep away thieves and swindlers it is recommended to wear a ring with a pearl (think about it when you have to face the signing of any contract!).

All these images of purity and moral integrity lost their luster when the unfortunate belief that pearls bring tears was introduced. You will agree that this nonsense was surely introduced by envious people, because, as it says ‘pearl wears out those who do not have it’!

Given all these stories, I prefer the more unusual reading linked to the interpretation of dreams, which defines pearl as a symbol of becoming, of flowing, like the waves in which our gemstone is formed. In this movement the mother of pearl sphere grows solid and elegant, as well as the soul and the inner strength grow in the flows of life.

After this explanation, I invite you to the next article, where I will share some tips about how and when to wear pearls.