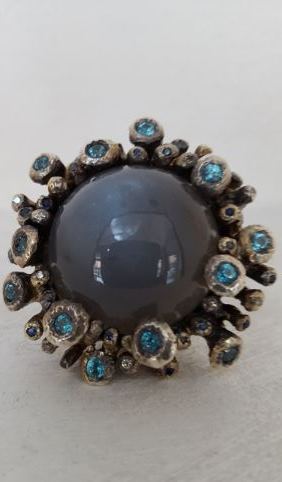 The stone I have chosen for the month of January is the clair de lune or moonstone.

A gem with a poetic and evocative name like the homonymous suites by Debussy and Beethoven or like the poem by Verlaine.

Romantic and mysterious with its fleeting glow. Full of promises and expectations, as the new year, it holds mystery and fascination.

The clair de lune  belongs to the family of feldspars, as labradorite and amazonite. It is commonly found on Earth’s crust but it is quite rare in the variant suitable for gem production.

The moonstone is characterized by an enchanting play of light. Indeed it owes its name to that mysterious shimmer which always looks different when the stone is moved and that is known as adularescence. In earlier times, people believed they could recognize in it the crescent and waning phases of the moon. This play of light is due to the lamellar (or scaly) inner construction of the stone, while the color is given by the percentage of albite.

The clair de lune has typically a milky appearance, but there are also wonderful varieties of gray, mocha brown, yellow, orange, green, pink and white ones. The rarest colors are blue, peach, smoky, champagne, black and red.

To maximize the effects of adularescence classical moonstones are always cut as cabochons and rarely with facets.

The cutter must also align the axes of the crystal precisely into the zenith of the stone, for that is the only way in which he will bring about the desired light effect.

The most precious stones are mined in Sri Lanka.